The second screening of our December film, I, Daniel Blake, will be on Wednesday, 21st December 2016 at 7.20pm. Wine will be available for purchase.

Winner of the Palme d'Or 2016, the highest prize at the Cannes Film Festival, 'I, Daniel Blake' is the latest social realism film from the multi award-winning British director, Ken Loach.  It is infused with quiet, but righteous anger about the failings of the society Loach lives in and which he repeatedly rails against so effectively.  It concerns an unlikely but tender friendship which develops between a single mother of two children and a middle-aged, unemployed carpenter, both of whom are feeling the effects of the shrinking welfare system they are dependent upon. This rare, political drama will touch your soul and perhaps go some way towards explaining Brexit and why certain members of society feel undeservedly disaffected.  Unforgettable! 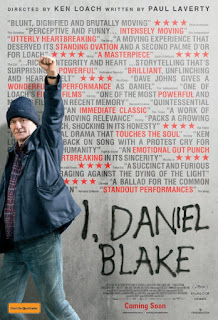